Data Access and Management in the EUDAT Collaborative Data Infrastructure 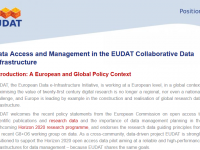 EUDAT, the European Data e-Infrastructure Initiative, is working at a European level, in a global context. Maximising the value of twenty-first century digital research is no longer a regional, nor even a national, challenge, and Europe is leading by example in the construction and realisation of global research data infrastructure.

EUDAT welcomes the recent policy statements from the European Commission on open access to scientific publications and research data and the importance of data management planning in the forthcoming Horizon 2020 research programme, and endorses the research data guiding principles from the recent G8+O6 working group on data. As a cross-community, data-driven project EUDAT is strongly positioned to support the Horizon 2020 open access data pilot aiming at a reliable and high-performance infrastructures for data management – because EUDAT shares the same goals.

EUDAT’s goal is to build a Collaborative Data Infrastructure (CDI) as a pan-European solution to the challenge of data proliferation in Europe’s scientific and research communities. The CDI will allow researchers to share data within and between communities and enable them to carry out their research effectively. Our mission is to provide a solution that will be affordable, trustworthy, robust, persistent, open and easy to use.

In short, researchers can rely on the EUDAT CDI as a repository for their data.

Guiding principles
In building the CDI, EUDAT is guided by a handful of principles, founded in a fundamental belief in open access to research data, and which overlap strongly with those in the EC’s Guidelines on Open Access to Scientific Publications and Research Data in Horizon 2020:

The principle of involving research communities as curators leads to the EUDAT CDI being a logical federation of data producers with a shared “back-office” rather than a monolithic entity trying to do everything itself. The CDI operates this way in a partnership model because the underlying infrastructure must be distributed, with a designated set of service-provider sites hosting common services for the wider research community. The CDI is thus a connected network of European research institutions (“community sites”) and data centres, each offering one or more common EUDAT data services to both participating research communities and independent researchers.

We illustrate this network model of the CDI below:

Connecting with the CDI
To join the EUDAT CDI, community sites or research institutions partner with their preferred data centre of choice. This one-to-one local partnership, governed by standard service-level agreements, keeps the interaction between research communities and data centres as straightforward as possible while giving communities access to the reach and strength of the CDI network.

To make use of CDI services (finding and accessing data, for instance, or storing smaller data sets), users can simply interact with one of the CDI public front-end services B2FIND or B2SHARE or, via the CDI Common Service Layer API interfaces (i.e. GridFTP, iRODS and, in due course, the HTTP API currently in development for 2014).

EUDAT believes fundamentally in open access. By open access we mean the free availability of data on the public Internet, permitting any user to reproduce and redistribute them for any purpose, and in particular for the purpose of non-commercial research, without financial, legal or technical barriers. The only allowable constraint on reproduction and redistribution should be to give authors control over the integrity of their work and the right to be properly acknowledged and cited.

One of the prime motivations for the CDI is to create a single domain of registered, well-described, cross-disciplinary data, connecting collections and data centres across Europe and harmonising access to them – harmonising access not just in the technical sense but in the policy sense.

All nodes joining the CDI are strongly encouraged to adopt open access policies towards their collections in return for the benefits of EUDAT replication and management services. In this, EUDAT follows two further guiding principles:

In the first instance EUDAT seeks to harmonise open access policy across the CDI through adoption of common persistent identification schemes and common data access licences.

Persistent identifiers
EUDAT adopts globally unique Handles to identify digital objects within the CDI. The Handle System, the system behind DOI and other well-known identification mechanisms, is administered by the new Digital Object Naming Authority (DONA) and is used worldwide. EUDAT works with the European PID Consortium (EPIC) to ensure all data objects registered in the CDI receive a unique, persistent Handle.
EUDAT encourages all participating sites and centres to adopt a common metadata core for digital objects based on version 3.0 of the DataCite standard. Coupled with the EPIC Handle service this creates a first level of harmonisation across the CDI domain.

Open data licences
All participating sites in the CDI are encouraged to adopt open licences for access to their data collections. Combining data released under different licences can be challenging, and because of this EUDAT intends in time to converge on one common licensing scheme for participating sites. Currently, EUDAT recommends two main licensing schemes for those planning to join:

Data management planning – thinking in advance about what will happen to data produced during the research process – is increasingly required by national research funding agencies, and new guidelines for Horizon 2020 research projects were released by the EU in December 2013 (Guidelines on Data Management in Horizon 2020).

EUDAT exists in part to disseminate and promote best practice in data management for twenty-first century research, and to provide support for communities in adopting basic principles such as PID registration, metadata creation, replication.

As part of its mission to help researchers and research communities manage and preserve their data, EUDAT has begun work with the world-recognised Digital Curation Centre on a version of their widely-used DMPonline tool which will capture the H2020 guidelines in a data management planning tool tailored to the emerging needs of European research. First versions of this tool will be available in early 2014, and will guide and support researchers through the process of creating effective data management plans for digital research in Horizon 2020.